Every driver has heard of an alternator. Whether it has ever given you problems or not, it is one major component of your car’s engine. But do you really know what an alternator is, what it does, and how to tell if it is faulty?

If you don’t, you need to. So stick around and read on, the information here will probably save you a lot of guesswork one day when your car starts behaving strangely.

What is an Alternator and What Does it Do?

Before I tell you what an alternator is, let me bust one myth that has many people groping in the dark when it comes to car electrics – your car battery doesn’t run your electrics. Yes, you got that right, let me explain.

Many people mistakenly think that the battery powers the electrics in their cars, that’s not entirely true. The battery provides the electric charge needed by the electric starter motor to start the car. Once your car is running, the alternator takes over the electricity generating and supply task ion the car. So in essence, an alternator is a generator that feeds your car’s electrical system and charges your battery at the same time. And for that reason, it used to be called a generator.

Signs of a Faulty Alternator You Should Know

When your car’s alternator becomes faulty, it’s easy to be tempted to think it’s possessed (remember Stephen King’s Christine), sending chills down your spine. But a faulty alternator is easy to diagnose, so banish those thoughts of calling a priest to exorcise your beloved car. Here, then, are the signs your car has a faulty alternator. 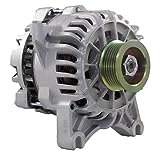 This, by far, is the simplest way to know that you have a faulty alternator. Most cars are fitted with a battery shaped warning light on the dashboard that lights up when the voltage going through the car is below or above certain stipulated limits (usually between 13 and 14.5v). Unfortunately, this light is usually misunderstood to be a faulty battery signal – it’s not. It is usually an indicator that you have a faulty charging system.

Because the alternator is your car’s main electrical supply, a faulty alternator will result in an erratic power supply. This will manifest in many ways which may include dim lights or overly bright lights, or the speedometer or other electrics misbehaving.

This when people usually think of calling their priest instead of a mechanic.

In modern cars though, the electrics won’t go as wild as in older cars due to computer programs that make it so that electricity is cut off from the non-essentials and channeled to the essentials such as your lights. So when you see your heated seats not functioning, followed by other electrical accessories, the culprit could be the alternator.

Another easy-to-read sign of a faulty alternator is flickering lights, usually when another load is added to the electrical system. For example, when you switch on the AC or open your windows (electric) and you see your headlights or dash lights flickering, it’s a sign that the alternator is not generating enough electricity to keep everything running smoothly.

The most common and obvious indicator of a faulty alternator is a battery that is constantly running down. This is because the alternator does not generate enough electricity to adequately charge the battery. But this can cause a bit of a challenge because it can be difficult to tell if it is the alternator or battery that is faulty. One easy way to be sure is to jump-start your car. When it starts running, remove the jumper cables, if the car continues running, it’s a sure sign that the fault lies with the battery (meaning the alternator is charging it thus the car continues running), but if the car dies again after a short while, it proves that the alternator is faulty and is not generating electricity, thus the battery picks the slack and quickly dies.

What to Do if You Suspect a Faulty Alternator

Now that you know the signs and symptoms of a faulty alternator, you are probably wondering what you should do when you notice that your car is possessed. Well, let me first tell you what not to do – don’t take it to the priest. So what should you do? Simple, visit your mechanic and have him replace your alternator before you get stuck in the middle of nowhere. Now, that’s a horror story many can relate to.