Most people don’t attend to the timing belt on their cars until it’s too late. And the simple reason is that few people actually understand the tell-tale signs of a worn out timing belt – like the ticking noise in the front part of the engine. But then again, I’m going ahead of myself. Let’s take a few steps back and tackle this issue from the top. 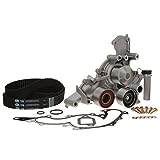 The timing belt is a belt in the internal part of the engine that is responsible for rotating the engine’s cam and crankshaft in sync (hence the name timing) and ensures that each cylinder in the engine fires at the right time. You will find the belt in the front part of your engine and housed under a timing cover.

Because of the incredibly high forces the timing belt is subjected to, it is made of very high-quality rubber that is strengthened further with nylon-reinforced cords inside. But, as it is a component that endures very strenuous conditions, it will wear out eventually and will need to be replaced; otherwise, your car will not run properly or won’t run at all if it is completely damaged.

One question that is asked a lot when it comes to timing belts is whether all cars use timing belts. The simple answer is no. Timing belts are usually used in vehicles with smaller engine displacements. For cars and trucks with engines that have a large bore and stroke, a timing chain is usually used in the place of a timing belt. Timing chains are made of metal, making them stronger and more durable than timing belts and thus suitable for the greater forces in bigger engines. Although timing chains are rated to last the lifetime of the car, timing belts are not and car manufacturers have recommendations when a particular car should have its timing belt replaced. But unfortunately, some belts don’t last that long. That is why you should learn to diagnose the symptoms of a failing timing belt.

Signs that You Need to Replace Your Timing Belt

So what are the signs of a failing or broken timing chain? Read on and find out. You may save yourself a lot of money in repair costs by catching the timing before it destroys other components in your engine.

1. Ticking Noise Coming from the Engine

Without getting too technical, a worn engine belt causes a ticking sound inside your engine. This is because the components it is supposed to be keeping in sync (crankshaft, camshaft, etc.) lose their “timing”, resulting in the ticking sound. If you notice that ticking sound coming from your engine, contact your mechanic as soon as possible and get your car checked out. A broken timing belt will cost you more in repairs as it will cause damage to other parts of your engine when it breaks.

2. The Engine Not Turning Over

Sometimes, the timing belt can break inside the engine without you noticing. You will notice it, however, when you next start your car. The starter motor will engage but the engine will not turn over. This is because the timing belt is the one responsible for turning the crank and camshaft. In most cases like this, the timing belt would have probably broken while the engine was running, resulting in more damage to other components like the cylinder head, crank bearings, or even the oil pump.

If your timing belt is worn out, it may occasionally slip on the camshaft drive and cause one cylinder head to open or close out of time – that is to say, when it shouldn’t. This will cause your engine to misfire. Again, if not attended to quickly, it will cause greater damage to your car.

4. An Oil Leak in the Front Part of the Motor

The timing belt cover is kept in place by many nuts and bolts that can come loose over time, causing oil to leak out.  This leak can result in the engine overheating and reducing the life of the timing belt. Another cause for oil leaking is that the gasket between the timing cover and the engine block could be worn out. This again could lead to overheating issues that can lead to a damaged timing belt.

I know that sounds cryptic, but time could be your best ally when it comes to preventing timing belt problems. What this simply means is that know the recommended replacement interval.

The timing belt is a critical component of your engine and should not be taken lightly. When you notice any of the symptoms mentioned, get your car checked out immediately.