The catalytic converter. It is one of those least known and valued parts of a car. But do you know that this little known and well-hidden part of your car plays a gigantic role in saving the planet? Not making sense? No problem, let’s take it from the top.

What is a Catalytic Converter? 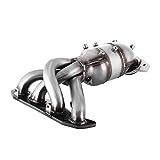 A catalytic converter is a simple device used to convert harmful gases produced by the combustion engine into less harmful emissions before they are expelled into the air through your car’s exhaust system. It does this by using two metals, palladium and platinum to catalyze (speed up) a redox (reduction and oxidation) reaction that converts the said toxic fumes into harmless gases such as – CO2 and water.

Signs of a Faulty Catalytic Converter

Although a faulty cat converter may not be an obvious fault to diagnose, there are a few simple ways you can diagnose a faulty catalytic converter. Let’s take a look at the, shall we?

2. A Rattling Noise Under Your Car

This one is from personal experience. When a catalytic converter fails, it sometimes breaks apart into many small pieces. These pieces make a rattling noise in your exhaust when accelerating or decelerating. This is because the pressure in the exhaust system changes, and the movement of causes the pieces to hit against the walls of your exhaust, causing the very irritating rattling noise. These small pieces can also pass through the exhaust system and cause greater damage to your engine.

Another indicator of a failing catalytic converter is poor engine performance. This means your fuel economy will increase due to wrong oxygen/fuel ratios being mixed in the engine, a result of a faulty catalytic converter and oxygen sensor situated just after the cat. Your engine will become underpowered and will struggle to accelerate.

What to Do When a Catalytic Converter Fails

I know I’ll get a lot of flack for what I’m about to say but I’ll say it anyway. When your catalytic converter fails, don’t replace it with a straight pipe. It may be cheaper than getting a newer catalytic converter but in the long run, it will cost the earth – literally.

With the advancements in technology, catalytic converters are becoming cheaper and easier to replace, so you have no excuse for not replacing yours.